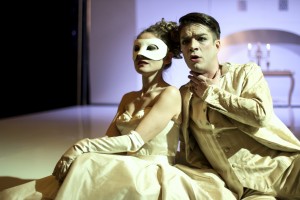 Fantochines, premiered under Montaño last March thanks to a Fundación Juan March and Madrid’s Teatro de la Zarzuela coproduction, had an excellent reception from the audience and the critics. Tomás Muñoz was responsible for the stage direction. It was broadcasted by Radio Nacional de España and Television Española.

On this occasion, performances will take place at Palacio de Hualle of Treceño on the 14th and 15th of August, within the Marcos Historicos (History Frameworks) programming of the Festival.