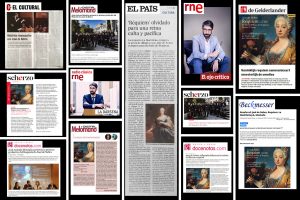 This recording of the historical «Requiem» by Spaniard José de Nebra, composed and premiered in 1758 on the occasion of the death of Doña Bárbara de Braganza, Queen of Spain, is the very first internationally of this masterpiece of the 18th Century Spanish Baroque. The project, under the direction of maestro José Antonio Montaño, who also edited the score, has enjoyed an unsurpassed reception in the Spanish and international media.

Radio Nacional de España, Radio Clásica, and the newspapers El País, El Mundo and the Dutch De Gelderlander stress the importance of this historic recording and join with the specialized media who call this interpretation “excellent”, “exquisite”, “ideal”, “elegant”, done with “great care”, and “teeming with subtleties”.

“Montaño’s scrupulous direction reveals his deep understanding and love for this work. The musicians of La Madrileña are excellent and play with a warm and enveloping sound that frames perfectly the Coro Victoria, itself acclaimed for its quality and contrast of their voices, their clear textures and a delicately woven sound.”

“José Antonio Montaño is a solidly trained, wonderful musician, a confident and efficient conductor who absorbed the wisdom of the late maestro Jesús López Cobos and who continued his training with other fine conductors.  He has an extensive CV and has conducted renowned orchestras, and he has performed in a variety of national and international forums. A few years ago he founded the period instrument orchestra La Madrileña, and recently he helped give birth to a beautiful Project directly linked with José de Nebra’s religious work. His group recorded the Office and Mass of the Dead, a masterpiece which had its debut in 1758 at the funeral of the Queen of Spain, Bárbara de Braganza.”… “We embrace Montaño’s project, which took shape after an enormous musicological work of study and revision and, finally, which offers us this interpretation of the Requiem that is admirably clean, respectful and suitable.”

“This recently recovered masterpiece, recently presented in concert, José de Nebra’s Requiem has now seen its first full recording by the Schola Antiqua of Juan Carlos Asensio, which brilliantly takes over the Office of the Dead in plainchant, and a stupendous Coro Victoria, accompanied by La Madrileña and all under the effective baton of José Antonio Montaño. It is, without a doubt, an important addition to the ever-growing discography of Spanish music of the 18th Century.”

“This recording signifies a great work of musicology and previous research on the part of conductor José Antonio Montaño, who with a meticulous study of José de Nebra’s own handwritten score has managed to recover a work of reference, a “culmination” of the Spanish Baroque (18th Century).”. “With an elegant interpretation, demonstrating great care and teeming with subtleties, we find the voices of the Coro Victoria joined with La Madrileña (orchestra of period instruments) and Schola Antiqua, which have managed to unite all their talents in a masterful way. Without a doubt we have here a work recorded with exquisite care that conveys through its delicate sound those emotions that José de Nebra reflected with such mastery in his score. A highly recommended edition.”

“In the course of the recent Festival de Arte Sacro in Madrid, this interesting score was only able to be presented because maestro José Antonio Montaño recovered it and conducted it with the group La Madrileña in the venue of its debut: the Church of Santa Barbara of the Convento of the Salesas Reales in Madrid. The recording is dedicated to the memory of maestro Jesús López Cobos. Truly interesting.” More information